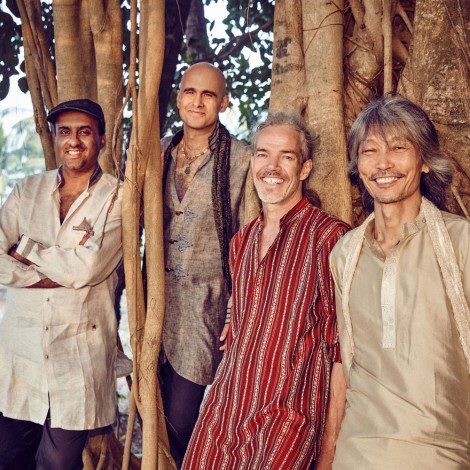 Pioneers of an eclectic sound that draws its essence from the depth of India’s musical traditions as well as the innovation of contemporary Western music, multi-instrumentalist and composer, Prem Joshua and his international band are a leading light in the world of Indian contemporary music. Unmistakeably rooted in Indian Ragas and rhythms, his signature sound embraces a variety of cultures and conventions from across the world. Interweaving rhythms from Morocco with beats from London’s dancefloors, experimenting with Eastern European rhythms and jazz, and splicing together chillout and sufi verses, his search for synthesis continues to flourish at the meeting point of genres and influences.

The music is original, immersive and emotional; it pulsates with energy, resonates with contemplation, throbs with vibrancy and basks within an unmistakeable global appeal. The band combines disparate musical styles such as electronica, jazz and funk into an original and virtuoso sound – one that is intricately detailed by a masterful blend of Indian and western instruments. By virtue of their dexterity over numerous instruments, such as the sitar, tabla, soprano sax or bamboo flutes, Prem Joshua & Band have continued to distil and fuse the essence of various musical forms into one organic and distinctive whole.

Grafted with skill and oozing depth, Prem Joshua & Band continue to provide listeners, old and new, with a deeply rewarding emotional journey across a musical landscape that is both varied and rich in tradition. With 15 studio albums, worldwide appearances and global honours, their timely interpretation of the music traditions of the East has been recognised time and again. Today, Prem Joshua is one of the highest-selling World Music artists in India and an institution unto himself.